Dany’s Blog – How was the trip to Japan

How was the trip to Japan

As you may know, Japan is on the other side of the world (if we consider leaving from Brazil, where I come from).  Flights from Brazil to Japan last an average of 24 hours (can last up to 48 hours).  But there are no direct flights.  It is usually necessary to take at least 2 flights, with a stopover in some other country.

Well, I tell you that: you need to do a lot of research to choose a company that best suits your needs and your Wallet.  Because each of them has some situation or requirement.  Be it price, seat preferences, transit visas, amount of luggage… I advise you to try recommendations from friends and acquaintances or even read the comments of people who have used the services of the companies you want to choose, always do a lot of research before you choose.

I researched countless companies, made endless budgets, pissed off a lot of travel agents to be able to choose, and yet I had a loss before getting my long-dreamed ticket to board.  So a lot of attention and patience is needed to not get in trouble.

To arrive in Japan from Brazil you can disembark at Tokyo (Haneda Airport), Nagoya (Chubu Centrair Airport), Osaka (Kansai Airport) and Chiba (Narita Airport).  From there you can make other flight stopovers to other Japanese states and cities, or even take a bus or train (I will not go into these details, but with a simple consultation on the internet you will find more about traveling within the country in these type of transportations).

As I knew I would only be traveling at the end of 2019 I spent the whole year researching prices.  Trying to choose an appropriate date, an airport to get off in Japan. As I chose to live in Toyota, which is in Aichi and as my wife was already living here, there would already be 2 flights from Brazil and not having to take a third  flying to the state of Aichi, I decided to get off straight at Nagoya airport which is about 2 hours away by car from Toyota.

I did a lot of research about which companies users most complain about flights, and I realized that there are numerous complaints about several companies:

They had other companies, but the ones with the most negative comments were those.

But as the human being is anxious and imperfect, at the time I wanted to save money and thought more about the price than about certain difficulties that I could go through. After you make a lot of budgets on the websites and travel agencies, you start to suspect that the agencies are actually throwing you the knife and charging you more than they should. Then I found a flight promotion by Air China, much cheaper than several other sites. Almost half the price. But it would be purchased through the website.

To apply for a visa to visit relatives to Japan it is necessary to have a reservation or return ticket.  Even knowing cases of loss of luggage and even poor service in the onboard service, I went there, anxious that I am, and bought it because it was cheap, only I didn’t read everything as I should and let it pass that in case of cancellation I wouldn’t have my  money back.  When I applied for my visa the first time they did not want to get my documents because they required an additional document from my wife that would take 1 month to arrive.  But I had already bought the ticket on Air China and it was dated for days before that document arrived.  I was afraid to get the document and take it to apply and they demand something else.  So, due to lack of knowledge, I preferred to cancel the tickets.  And That’s where things gone wrong.  After the cancellation was made they said that the money would not be returned because I bought it in the promotion.  Even canceling more than 1 month before.  I even looked for lawyers to help me but there was nothing they could do, I’ve made the wrong purchase, because in the Terms and Conditions on their website they said that they would not give the money back(who reads all the terms and conditions on websites in the smallest details? Well, I don’t. My big mistake.) in the end I lost U$ 700.  A month later the statement came, and I went back to the consulate and they still took another week to give me the answer.  At that point my nails were almost gone because I was biting them with anxiety.

So I decided to go back to the travel agents for quotations, because I didn’t want to risk buying the wrong ticket again.  Of all the options I was given, I preferred to choose Lufthansa, as the vast majority of user comments about it were positive.  (And also decided that I would never by Air China Tickets again!)

Summary of what helped me choose the airline: 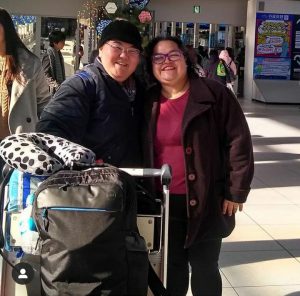 The flight was very smooth, I made a stopover in Frankfurt, and believe me, 3 hours stopover sometimes is not enough to arrive, make the passage through immigration, find the terminal for the next flight to check in and board.  It is a rush because boarding is far and you have to take a train inside the airport to go to the other boarding area.

At the and, It was a 2-day trip, counting the flight time, waiting at the departure terminals, stopover and overland to leave where I was in São Paulo and to get to Toyota.

I arrived exhausted, had 3 days of Jet lag, feeling dizzy and tired.  But very happy to be by my wife’s side after 8 months away from her.

Phew, this was a long one.  Lol. I apologize for that. Stay tuned for the next posts and send your questions and comments about what you think of our blog!