Dany’s Blog – Djavan Lied to us!

Djavan Lied to us!

For a person who loves to read and has always been very curious about everything, I must confess that Japan has caused a frisson and a mix between hunger for knowledge and despair for not being able to learn the way I thought I would.  When you come to Eastern countries, besides the language being different, the alphabet is something that makes you wonder where all those years of school you went to ended up.  It means being illiterate in a strange country. Yes, you read correctly.  Illiterate.  But let me explain to you how speech and writing works in Japan:

There are three “alphabets”, that is, three writing systems:

And each of them has a name, and all three are used at the same time, each in its specific situation.  So, to be able to read everything in Japanese, you need to learn all three systems. 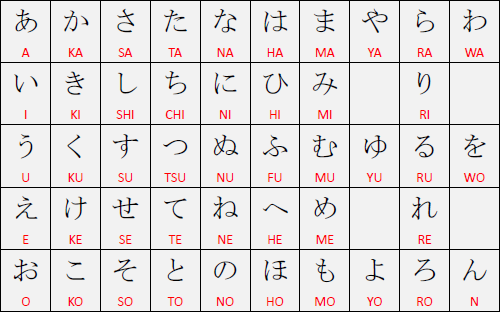 HIRAGANA is a 46-symbol writing system where each symbol represents a sound, equivalent to a syllable.  Japanese children at school begin to learn to read and write through HIRAGANA. 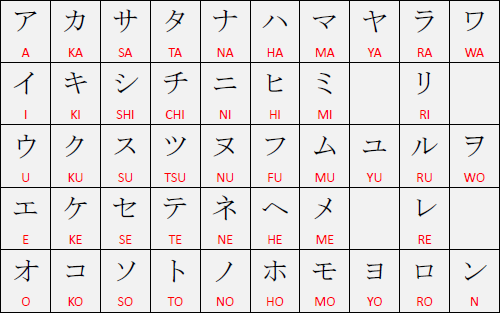 KATAKANA also has 46 symbols and is mostly used for words of foreign origin, such as country names, names of foreign people (your name will be written in KATAKANA!), As well as onomatopoeia.  For each HIRAGANA, there is a KATAKANA (Now explain to me why not just use hiragana? Since they both sound the same).

Alphabet in Katakana (black characters and sound in red) 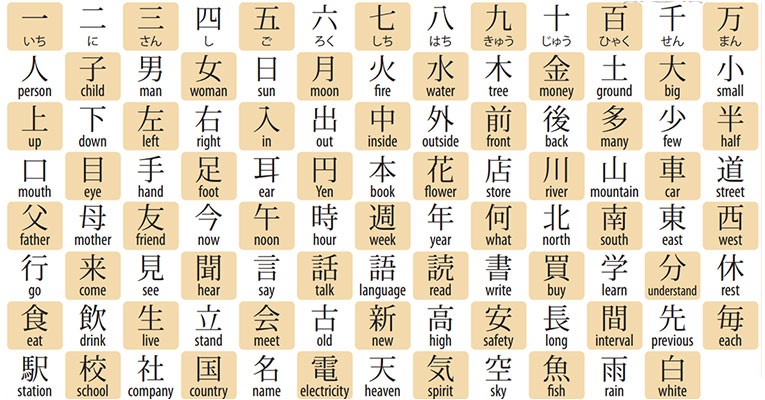 KANJI is the writing system that has more symbols of the three.  The main difference is that KANJI is not phonetic, that is, each letter does not represent a sound.  Each symbol represents an idea, each symbol has a meaning.  And joining more than one kanji represents something else.

It is impossible to know how many Kanji’s there are since some were created many, many years ago but the Japanese government has created a list of 2,136 most used kanji.

So, have you done the math?  46 Hiragana + 46 Katakana + 2,136 Kanji (with numerous meanings).  Oh, and I can’t forget to mention that many Japanese people don’t know what several kanji mean (according to some videos I saw on YouTube).

And another big problem is the mixture of Western and Eastern words.  Just like we do in Brazil using words like ‘Layout’, comedy ‘Stand Up’, ‘milkshake’ among others.  Well, in Japan they also use words like that, but they don’t know how to pronounce certain letters, like ‘L’ and ‘V’ for example.  And they don’t pronounce 2 consonants together or even end the letter S and some other consonants like us, they add a ‘U’ at the end, which generates different words than we know and the understanding is even more complicated.  Here are some examples:

Yes, Djavan (Brazilian Singer) lied to you!  No. It is not easier to learn Japanese in braille, you will decide whether or not you will allow me in your life long before I learn Japanese.

Some reasons for me to say this is beyond this bunch of different ideograms and meanings, the lack of time, because of long working hours, the fatigue in your time off is so big that you only think about sleeping or relaxing  and not studying, and, my own lack of commitment to the language since I don’t even know if we’re going to live here forever or not.  Yes, I am largely to blame.  I know.

But for those who live in Japan, it is obvious that learning the language is essential.  Well, it is even possible to live here without mastering Japanese, but we have to be aware that this makes life super limited, as we end up living dependent on interpreters for simple things like ordering your favorite snack at “Makudonarudo” (McDonalds), daily things at work, and even important things like medical appointments and bureaucratic issues with government and immigration.

So I know that I need to learn that language.  And the Japanese language has several curiosities in its history which makes it even more interesting.  But my attempts so far have not been very happy.  It is necessary to practice, practice and practice.

My advise to you is: if you want to come to Japan try to learn the language as much as you can before coming here, I didn’t do it and now I’m here suffering.  I currently use some apps (when I have time) like DUOLINGO, DROPS and JAPANESE DUNGEON.  I also have seen many tips on TikTok, Youtube and Instagram.

Not at all I want to disappoint you on your way learning Japanese.  On the contrary, I recommend that you study hard and don’t do like me!  Good luck at your learning. 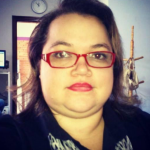